The Event couldn’t have been more contrary to the one before and usual Endurance Racing Events – the weather was splendid with temperatures of over 20 degrees – just one week after we have experienced Snow at VLN 2. The event itself took place in two segments of 4 hours on Friday and 8hours on Saturday, a common format for the organizer Creventic.

Last chance to grab 3-years NordVPN deal for only $2.99/mo

This is the Men´s Spa

44 Entries, bright sunshine and free access led me to the 12 hours of Spa-Francorchamps. This Race is part of the 24 Hour Series European Championship by Creventic. This is my first visit to the venue this year.

In the beautiful surroundings of the Belgian Ardennes, the 7km long iconic Circuit offers dramatic races and great sports. For Spectators, it provides lots of spectacular places to have a sight on the track to follow the race and enjoy legendary corners like Eau Rouge, Double Gauche or Le Fagnes.

Spa-Francorchamps is always worth a visit to enjoy a great day track side and experience Motorsport Festivals.

The 12 Hours of Spa started at 14:05 with 2 laps behind the safety car divided into two starting groups. One for the GT Entries and the second for Touring Cars.

Finally unleashed from their chains it was the Ferrari 488 GT3 from Scuderia Praha to lead the field in the opening hour.

Climbing up the field it was the Grasser Racing Team, with it´s Lamborghini Huracan GT3, to take over the lead after a Code 60 Phase after the first hour.

Preparation for the Total 24 Hours of Spa

Besides the already mentioned Grasser Racing Team, it was also Phoenix Racing, HB Racing, Rinaldi Racing and the Belgian Audi Club Team WRT who entered the race. They took chance to give drive time to their drivers and collecting time on track for the participation of the Total 24 Hours of Spa later this Year in July.

With the duration of in total 12 hours, it was good opportunity for those teams and drivers to experience the challenges of the chase twice around the clock.

With their 5200ccm Engines they impressed with a monstrous sound and were by far the loudest cars on track.

Personally, it was a huge pleasure to see these rare beauties for the first time. That makes it even more unfortunate that both cars had its problems early in the race and retired soon. 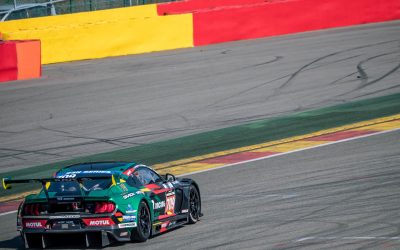 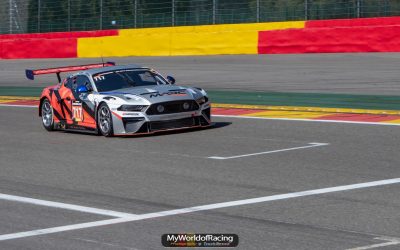 Other Highlights were the new Aston Martin Vantage GT4 entered by ProSport from Germany, which was one of the first races of the new car, and a BMW M3 by JR Motorsport from the Netherlands.

The M3 impressed with an aggressive look which comes from it´s sophisticated Aero Bodywork.

With the 2 Marc II V8 Cars retired early from the races the M3 had no competitors left in its class and brought back home SPX Class Victory and P21 overall.

The Grasser Lamborghini took the lead, just as Scuderia Praha went unlucky in Code 60 Phase and had fallen back to P11. Whilst the Grasser Racing Team controlled the Race, the Ferrari Team showed a truly phenomenal performance. They took back the second position just one hour later and even managed to take the lead by the end of the first segment.

Whilst those both teams did very well in the first part of the race it was the opposite for the Audis of Phoenix Racing and WRT. Both found their selves down the order on position 25 and 28 after the first hour. In the forthgoing race, they worked their way back up constantly. At the end it was of far more success for the Phoenix Audi who ended up in 8th Position whilst WRT took P18.

For a short time, benefitted from pit stops and problems of the GT3 Teams, the Cor Euser Marc II V8 could hold the 5th Position by end of the second hour. Minutes later they ended up in the pits for repair work. After being in the garage for over an hour they managed to get the Car back on track. Only 2 more laps they retired ultimately from the race.

The best Porsche appearance was done by Herberth Motorsport who were constantly in the Top 3. They had only to back off for P4 for short period for the WTM Ferrari.

The WTM Ferrari showed a strong performance though dropping down the order on P7 in the first hour. They climbed place after place which found it´s apex in the second hour on the third position.

It was then a tire puncture that put them back in the order and made a better result than ninth position impossible by the end of the first part of the 12-hour long race.

$20 off Orders Over $400 with code BUYNOW at 4WheelParts.com, For a Limited Time. Exclusions Apply. Shop Now!

It showed then that this tire failure was no exception. During the race, many teams, such as Grasser Racing or Car Collection, experienced tire failures but it was the especially the Ferrari Teams who were massively struck by tire damages.

Several times it was the WTM Ferrari who had to do unscheduled pit stops as of tire punctures whilst the HB Racing Ferrari, had a tire blew on the Kemel Straight just about 70 minutes to race end. The Ferrari spun from the track and found its end in the barriers.

As a consequence of the disastrous tire performance and the heavily crash, the WTM Team decided to retire from the race as the risk was too high from their point of view.

This is quite understandable in consideration of so many tire failures and the manufacturer will have to investigate why so many tires failed during the race.

On Saturday the second part started early in the morning with Friday´s result as the starting grid.

Not only the leading Position saw many changes until Herberth Motorsport took the leading role for about 4 hours, but also the following position was fighting for heavily.

Phoenix Racing had quite an eventful Saturday starting from position 7 and going up to the second position after the third hour. They defended the position in the leading group for a podium finish on P3.

Whilst Phoenix Racing had a strong performance the Grasser Racing Team founds its hard luck. Taking back the lead after 2 hours a tire puncture and bigger damages on the car bound the Lamborghini for over 30 minutes into the Garage. With a total pit time of over an hour no better result than P8 was possible.

Continuing its catch up on Saturday WRT moved up the order to P4 with 7 hours gone to the race. Bad luck in the final hour left them unrewarded back on the seventh Position by end of the day.

Starting on P8 the WTM Ferrari showed a strong fight despite further tire failures which led them up to P6. After they retired from the Race for Saftey reasons it was the 19th Position at the end of the Race.

The Scuderia Praha Ferrari was unharmed from the tire problems and managed to stay in the leading group all race long. They took over even the lead several times. Short to race end being on P2 the race deciding moment happened. The Herberth Motorsport Porsche had to go for another splash and dash in the final minutes which was enough to take the lead of the Race for the Scuderia Praha and bring it back home.

The 12 Hours of Spa by Creventic saw a lucky but deserved Winner with Scuderia Praha whilst Herberth Motorsport took at least glory in the Amateur Category.

The final Result you can find here:

At PriorityTire.com, you will find the Large Selection, Lowest Prices, Fast Delivery and FREE Shipping on new tires for your vehicle and much more!

Creventic´s Event with my Eyes

Organizing Endurance Races all over the world such as the 24 hours of Dubai or the 24 hours of Barcelona for years now, Creventic has clearly shown its experience at the 12 hours of Spa.

Offering free entry and access to areas in the paddock, that are normally not accessible or only with a special Ticket, in combination with family-friendly Race format, Creventic has set up a Spectator friendly Event that is absolutely worth a visit if you are in love with GT Racing like me.

TrackRecon MS © MyWorldOfRacing
Tell the World about Your Company with eReleases.com! All new customers get $130 Off the Newsmaker distribution. IGNORE our normal rates because they're being BLOWN AWAY for this special promotion!

My World of Racing

My World Of Racing Social media

Passionate hobby photographer with a focus on Motorsports; GT3/VLN/24H Races and more.. Official Member of @TrackRecon Follow me on IG @MyWorldOfRacing