Golf R EBC YellowStuff Pads / EBC Ultimax Grooved Disc Combo – High friction from cold, not requiring warm up for street use yet when loaded up and really hot the brakes just get better.

2 in stock (can be backordered)

EBC yellows are ECE Brake safety tested which means they must work perfectly from cold at least as good or better than stock pads.

When Yellowstuff see some heat (which is not tested for in the ECE R 90 brake safety regulations) they really show their pedigree. On Japanese cars built with lower friction FF rated pads these deliver a full grade higher stopping and on German cars built with GG these are about the only aftermarket pads that will match or beat the pretty good German OE spec pads and that takes some doing. 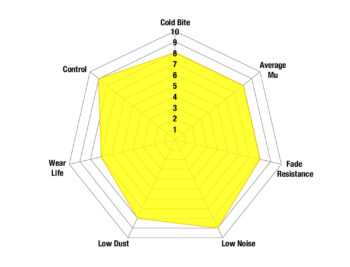 Not only a high friction pad but very resistant to heat and loads of heavy braking means that yellowstuff has been used with great success in race cars and on high speed Police Vehicle brakes alike.

EBC Yellowstuff pads are used on the UK Silverstone Race Track Drivers experience cars because of their high performance and longevity. Yellowstuff also claimed a win in the Targa rally and for two years running in the Brazil Mitsubishi off Road Team Desert Challenge.

Because of its huge heat range, the applications where EBC Yellowstuff will deliver benefits range from fastest street use on higher horsepower cars and race use on most street based cars and even as a brake upgrade on Trucks and SUV.

Yellowstuff is especially appreciated on Trucks for towing and heavy loads and where wheel and tire oversize upgrades have been fitted. In longer races EBC Bluestuff NDX or the new EBC Orangestuff grades should be considered.

Can’t find what you’re looking for? Fill out the form below and we’ll respond with a quote..

Race drivers love it because…

EBC Yellowstuff is an aramid fibre based brake compound with high brake effect form cold and is possibly one of the first ever compounds that can be used for Street and track driving.

These pads do not require warm up but do get even stronger under the heat of hard driving. These are not a low dust pad and if your desire is for a low dust premium street use pad, you should consider EBC Redstuff.

When considering full race use, Yellowstuff has been a strong favourite, having been used for two years in the Swedish Camaro Cup and at numerous other race events where a stock caliper system is fitted. It is also the choice of 90% of the Mazda MX5 Miata competitors in the UK race series and has an unblemished record as rotor friendly track pad for vehicles up to 3500 lbs or 1600 kilos weight.

The SCCA and NASA drivershave been testing Yellowstuff with feedback and good reports POURING in from a 543 test driver major market proving event with these groups. Read that figure again 543 test drivers.There is no guesswork here.

The POLICE love EBC Yellowstuff because…

We did some serious testing of every pad we could find with the UK police force at Bruntingthorpe airfield in the UK and got a big thumbs up from the boys in blue. Now the majority of UK Police forces use and love this product.

It has extended fleet miles and reduced their fleet operating costs and allowed Police Chase cars to drive harder and longer in blue light events.

These Police forces have been using EBC Yellowstuff for almost three years now and not one force has had an issue that has caused them to stop buying, they just want more of this fantastic brake product.

Many part numbers now carry ECE R90 approval. Check with our technical department on [email protected] to confirm if this material is street legal for your model when using for highway driving within Europe where regulation 90 applies. Outside Europe just fit and enjoy, these pads are the grippiest and most impressive pads that you will have ever used. Click here for more information about ECE R90 brake safety regulations.

There are no reviews yet.